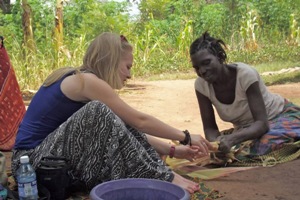 This summer, Izzy Bloomfield, one of the trustees of a little bit of HOPE in the UK spent six weeks with our team in Uganda. Sarah is one of the women she met.

Sarah is in her early 40s with four children, one of whom is a very young (and cute!) baby. Having visited some widows two years previously, I knew what kind of thing to expect when going to see Sarah. But I hadn’t realised how much it would still affect me seeing her small one-room house. It’s a hut, made from cement and mud, with a broken straw roof. She sleeps in there with her children in one bed and also uses it as a kitchen. I couldn’t stand inside it for more than a few minutes because the smoke from the fire was so thick it hurt my eyes! And she lives in there. Every day. All of her belongings were inside this hut, although there weren’t many of them. We sat and chatted for some time, while her youngest cowered away from me, I think a little scared by my white skin!Shortly after Katie arrived in Uganda we received mangoes and papayas which Sarah had sent for us. Katie was grateful for this but until we went to visit Sarah to say thank you, she didn’t realise the significance of the gift. Sarah’s generosity was overwhelming and we knew we couldn’t easily express how thankful we were – for someone who has so little to give us any kind of gift blew us away.We don’t want this blog to sound like we’re pitying or patronising a poor woman in Africa. This was just the reality of what we saw during our time in Uganda. It’s quite difficult to describe without sounding pessimistic or hopeless, but this definitely isn’t the case. We believe there is hope for Sarah.
Sarah is one of the widows who benefits from the programme a little bit of HOPE (Uganda)is developing with Busolwe Pentecostal Church to support widows in the village of Bugosa.
Last Christmas, our supporters in the UK gave money which enabled the church to distribute hampers to each of these widows. Even after half-a-year the women were still talking about these gifts. It was about more than just the food, it was the message behind the gift – that people cared for them, that they hadn’t been completely forgotten about.
The work with the widows is continuing and expanding. We’ve now been able to provide bedding, mosquito nets and jerry cans. Soon we’ll be commencing a programme of repairing homes and even building new homes for some of the women.
In the coming months we’ll be organising training for some of the women, to enable them to start generating income to support themselves and their families. Many of the widows are young, some are much younger than Sarah, and have small children. The team of volunteers from Busolwe Pentecostal Church are also encouraging the women to pull their resources together and develop a stronger sense of community where they can support each other.One widow we met knew of a small-loans group in a nearby village, which she seemed keen to see replicated in some way in Bugosa. It was exciting to see ideas being generated from within the community, rather than from outside sources. Our intention is to walk with these women, enabling them to put their ideas into action. Being able to put their skills, knowledge and limited resources to good use will give them much hope and the little income they may generate could go a long way.